An award that empowers change

Pressman Program inspires undergraduate engagement in politics and policy, and sometimes a complete pivot in direction. 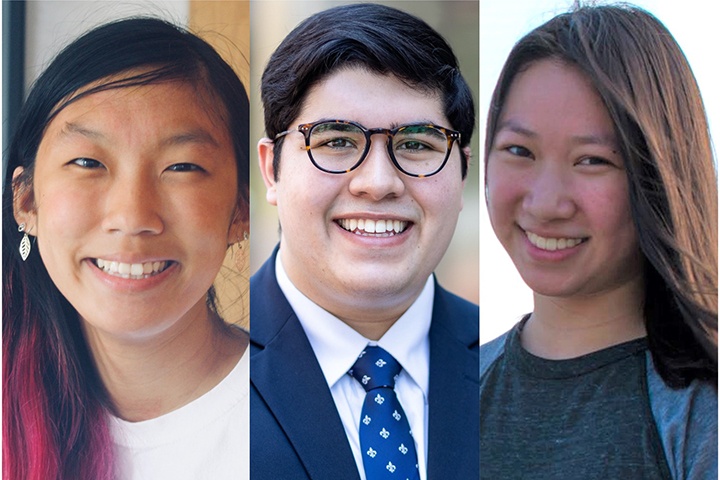 “I grew up thinking government was useless,” says Michelle Tang. Today, the aerospace engineering major is engaged in community organizing and plans a career in public service and policy.

Central to Tang’s change of heart, and direction, was an immersive summer 2021 internship as a legislative assistant for Massachusetts State Representative Erika Uyterhoeven, working on a project to make local government more transparent to constituents. Tang says she learned how elected officials can “pull levers of power to get something done.”

This experience would not have been possible without the support of a Jeffrey L. Pressman Award. The award, administered on an annual basis by the Department of Political Science, recognizes talented MIT undergraduates pursuing research or internships in US government, politics, policy, law or education. With Pressman stipends, MIT students have the freedom to explore domains new to them, sometimes far afield from their primary course of study. It is an opportunity that can prove transformative, as Tang and other undergraduates attest.

A shift from STEM

Stephanie Zhang came to MIT to focus on computational biology. “It was one of the few schools with a degree program in the field, and I wanted to work specifically on cancer,” she says. “It was the ultimate disease that needed to be solved.” She dug into research at the Whitehead Institute on the effects of hormones and sex chromosomes on gene expression, and in 2021 won a Merck Prize for her outstanding work in computational biology or bioinformatics.

But her internships in areas related to her major left her dissatisfied. At a cloud-based enterprise company she spent a summer “optimizing software to save somebody an hour of time,” she says. “Maybe it was because what I was doing didn’t help anyone and what I really wanted was to do something with a more direct impact.”

Zhang had greatly enjoyed American Foreign Policy (17.40) and other political science classes in her first few years. “I started thinking that I liked how political science gave me the chance to think about deeper problems and analyze the world,” she says.

In junior year, “already super close to getting a political science minor,” Zhang decided to add Course 17 to her other major, computer science and molecular biology. Then a class in education, politics and inequality taught by Ben Ross Schneider, Ford International Professor of Political Science, lit a spark in her.

“The biggest thing for me was educational policy, specifically educational equity,” she says. As a child of software engineers in the college town of Boulder, Colorado, Zhang knew she’d had access “to amazing educational experiences” not available to many of her MIT classmates. This was a topic she felt she had to explore.

Zhang won a Pressman Award to work on Capitol Hill as an education policy intern for Senator Richard Burr of North Carolina on the Health, Education, Labor, and Pensions committee. “I didn’t know about politics, and I thought it would be a cool experience to jump into the thickest part of it, to see firsthand the nitty gritty of policy making,” she says.

Zhang wrote research reports on the impact of Covid on schools. She also attended Senate hearings, debate, and votes. This experience, she says, gave her a sense of meaning she couldn’t find in her scientific research. Zhang is now writing a senior thesis on New York’s elite exam schools, and training her sights on a career she couldn’t have imagined when she first entered MIT. “The Pressman internship validated my interest in public policy, and my desire to work for government in some capacity,” she says.

An advocate for justice

Growing up in tiny Sulphur, Louisiana, David Spicer picked up what he calls a “very quirky passion” in fourth grade. “I was into extreme couponing, a way of saving money on the necessities of life,” he says. Spicer was so skilled that he became the “big shopper in the family, able to purchase hundreds of dollars’ worth of products for 10 dollars.” Spicer became a resource for Sulphur neighbors needing help getting by.

Attuned to inequality of all kinds, Spicer organized teachers and students to seek better funding for his high school, which lacked the resources of other schools in his parish. “We met with Louisiana state education officials,” he says. “It taught me to be an advocate, to speak up when I see something isn’t right.”

Spicer brought this commitment to MIT, which he had come to know through edX courses. “I was hooked on education, and on problems of racial equity and diversity, and knew that I wanted to explore different research experiences and internships in these areas.” A Course 17 major offered both the support and flexibility he sought to pursue this kind of academic program, both in and out of the classroom, Spicer says.

In January of his freshman year, he won an internship with Massachusetts Advocates for Children (MAC), an organization dedicated to making education more accessible and equitable. With a Pressman Award, he was able to spend an entire summer with the group, creating a Covid-19 information clearinghouse.

“The help line at MAC was ringing off the hook with families who needed devices for their kids to Zoom into class, or whose children, who were missing school, were labeled as truants.” Spicer, who was picked on in childhood for a speech defect and for his Mexican-American heritage, says “working with the low-income families and children with disabilities that MAC often represents resonated with me.” He was especially attuned to issues of racial inequity in special education. “It’s well established that Black males experience disproportionate rates of discipline in schools, and I thought about this intersectionality when I put together my clearinghouse.”

Spicer organized webinars for families to learn their rights for virtual learning during the pandemic and worked with MAC attorneys who represented them. Hearing directly from parents about the hardships they faced was difficult, he says, but “it’s something that fueled me, made me passionate,” he says. “I knew that I was in the right space to make change.”

This internship not only solidified for Spicer that “education is the path,” but also, he says, “helped me take ownership of my thinking about education through an equity, diversity, and inclusion lens.” After observing the difference MAC attorneys made in people’s lives, Spicer says he is now contemplating getting a law degree “to help me advocate for families, and to bring about more equitable policies in the education system,” he says. “With a law degree and a PhD in education I could be a leader for DEI in education.”

The power of local politics

For Michelle Tang, the Pressman internship enabled her to work on problems with immediate and tangible impacts on people’s lives. As an assistant to a state representative, she helped build a website to inform and engage Somerville voters on issues unfolding on their doorsteps, including a major city redevelopment that affected green spaces and affordable housing.

In the course of her assignment, she monitored legislation in the Massachusetts State House with implications for Somerville neighborhoods, and she met organizers who pushed for community benefits that guaranteed economic equity and racial justice. “I realized that a lot of work can be done on issues at the level of local politics that can’t be done at the federal level,” she says. “As a result of working on this, I got involved in local election campaigns, and now I want to get into local-level politics.”

Tang is especially interested in what she might be able to accomplish in the Boston area to attack climate change, through laws reducing carbon emissions from buildings and transportation, and at Logan Airport. “There’s a lot of work here, and I want to stay and help with these initiatives.”