What makes for better bureaucracy? 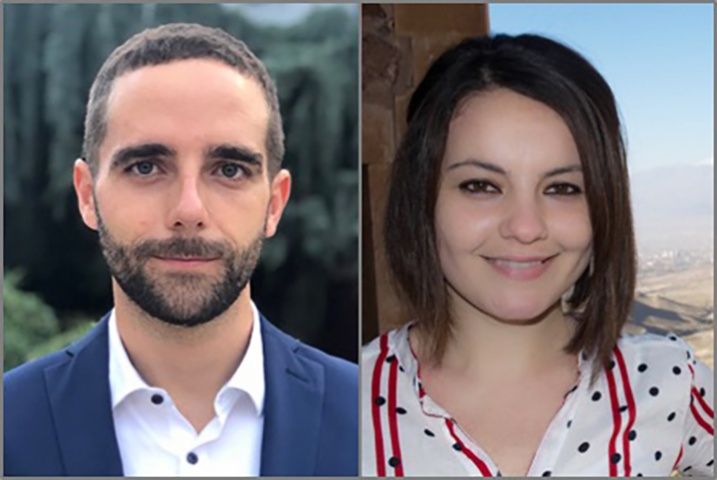 Civil servants and the political systems in which they are entrenched don't normally get much love. Charged with essential public service missions such as providing working infrastructure, effective schools and vital healthcare, bureaucrats often earn low marks. But new research by Guillermo Toral and Tugba Bozcaga, political science doctoral candidates, may begin to change perceptions.

"People might be surprised by the degree to which social proximity affects bureaucratic performance," says Bozcaga, whose studies revealed that a well-functioning bureaucracy can be a function of geography. "Bureaucrats with informal ties to each other deliver services more efficiently."

Although both students are investigating the political dynamics of bureaucracies and how these dynamics affect the quality of services provided to the public, they approach their questions with singular methodologies, in distinctly different contexts.

Born in Spain, with an undergraduate degree from a public university in Madrid and a master's from Oxford University, Toral worked for the World Bank in its Latin America sector, helping to develop and evaluate education projects. "This experience exposed me to the workings of large, international organizations, and to how different governments deal with similar development challenges," he says.

He was particularly taken with the different ways nations like Brazil and Chile educated their public school students. "I started to become interested in how the quality of education, and more broadly, public services, varied within each country," he says. “The quality of public services varies a lot even within the same city and with it citizens’ opportunities and human development.”

This variation in quality, Toral suggests, can be traced largely to the individuals who occupy these positions — the professionals such as teachers and doctors who deliver public services directly to citizens.

For his doctoral thesis at MIT, Toral set out to study the connections between bureaucrats and politicians, and their impact on who enters the bureaucracy and how effective they are at delivering public services.

"In many developing contexts, the ability to hire and fire public employees is a very valuable political resource, yet we still do not have a very fine-grained understanding of how politicians decide to allocate public jobs, and how political dynamics affect the quality of public service delivery,” he says.

Toral, seeking to understand the political dynamics of public employment in Brazilian local governments, spent 18 months in the field between 2016 and 2019, traveling by car through six states to small and medium-sized municipalities, interviewing bureaucrats, politicians, and anti-corruption agents face to face. In one state alone he coordinated a team of 21 research assistants and surveyed 926 bureaucrats in 150 municipalities.

"I wanted to hear from local actors about the challenges of their jobs and how and when politics made things harder, or easier," he says.

Toral also gained access to detailed, confidential data from the federal government about the nation's bureaucrats: who was hired and fired for particular jobs, and how the electoral cycle affected these appointments.

In addition, he took advantage of information on the internet about bureaucrats and their performance. Relying on these data and quasi-experimental methods, Toral developed measurements of how phenomena like political turnover or political connections affect the quality of schools and clinics.

Toral's scrutiny of his data revealed, among other phenomena, that there are electoral cycles in the hiring and firing of bureaucrats. One of his findings showed that politicians inflate public employment ahead of elections and that – possibly as a result – the delivery of healthcare services declines in the months around the election.

Toral's research ultimately "unpacks patronage," he says, by delineating five different rationales that drive politicians' use of public jobs, each with different impacts on service delivery. For instance, politicians sometimes use employment to mobilize voters to win elections, to reward supporters, or to stack the deck against opponents when voted out of office.

But one rationale for political patronage enhanced bureaucratic performance. Toral found that in developing settings where politicians care about service provision, but lack money and other resources to motivate bureaucrats, political connections could "boost trust, coordination, monitoring and accountability, all useful resources for service delivery."

Growing up in Turkey in a working-class family, Tugba Bozcaga was fortunate to study at the top schools in the nation thanks to the centrally-administered national exams and free public education. She was keenly aware of economic inequities: "I thought a lot about creating more equal institutions and access for people to public services," she says.

Her college studies in economics, as well as a stint working for the Turkish state in capacity-building projects within local governments deepened her interest in social and economic equity. "If people have good infrastructure in their neighborhoods, access to schools and health clinics, this means less inequality," she says.

Bozcaga's doctoral research explores public service provision in Turkey, which has a highly centralized government with public service institutions structured to function the same way in the nation's many towns and villages. Yet government delivery of social services across the nation varies widely. Bozcaga set out to understand, she says, "why some places see lower government performance, leaving people in those places disadvantaged."

Bozcaga fastened on the idea of bureaucratic ties as a potentially significant factor in such inequities. Based on her prior experience working with government groups, she knew that when bureaucrats could pick up the phone and call someone in their personal address book for help, it made a difference in getting a job done.

"People with informal ties to each other, from daily life, have an advantage over those who have to write letters, or go through some other formal interaction," she notes. "If you run into each other at a coffee shop, you can make a fast inquiry about a problem, or request certain resources."

Bozcaga hypothesized that tighter social ties between bureaucrats and government administrators might enhance the delivery of public services. To test this idea, she conducted interviews with more than 170 bureaucrats to learn about their social connections with each other, and how they did their jobs. She also produced exhaustive and novel data sets culled from the administrative websites of more than 35,000 Turkish villages, mobile phone records, and geospatial satellite information. In addition, she developed an original database identifying the religions and sects of each village.

"Creating this dataset, which involved various processes from manual coding to web scraping, was my biggest research challenge," she notes.

Her interrogation of these varied data sets yielded a set of provocative findings: In spite of Turkey's centralized bureaucracy, there was great variation in how village- and district-level bureaucrats provided public services. Social proximity, Bozcaga learned, plays a large role in determining good government performance. Specifically, when distances among bureaucrats make it easy for them to form networks, they can do their jobs better.

"Bureaucrats are not robots, they are part of a local social context, and their relationships with each other affect how government provides services to citizens," she says.

Bozcaga also discovered that ethnic and religious differences between different levels of the government hierarchy, which increased social distance and demonstrated social fragmentation, created a lack of coordination in service delivery. "This makes the situation of local minorities even worse, because street-level bureaucrats representing these communities are less likely to reach out to high-level bureaucrats, when in need," she says.

While their research on the political dynamics of bureaucracies has focused on specific nations, both Bozcaga and Toral hope their findings have broader implications.

"Even when elections don't help improve the lives of citizens, perhaps understanding local social contexts and their implications for bureaucratic behavior and state capacity can increase access to services and make a difference in social welfare," says Bozcaga.

Toral hopes that policy debates for bureaucratic reform in Brazil and beyond will benefit from his findings about the different ways in which politicians use public employment. “The way bureaucracies are organized can have a large impact on public employees’ ability to deliver services, especially in challenging environments like the ones I study in Brazil.”