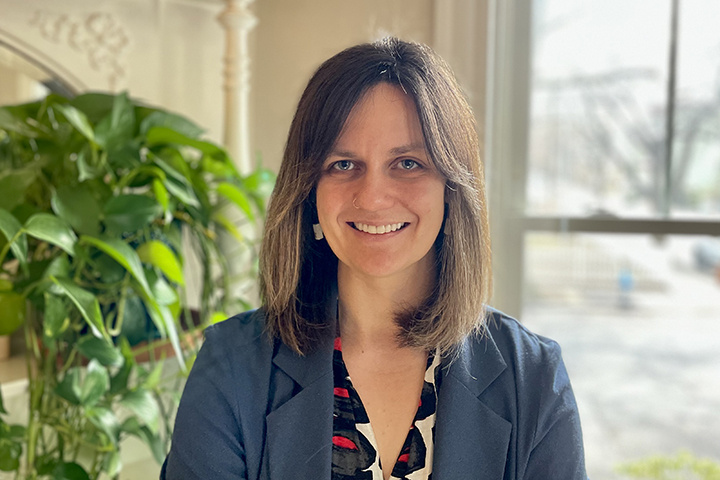 Paige Bollen, Course'17 PhD candidate, realized that “political science wasn’t what I thought it was,” she says. “You could bring psychology, economics and sociology into thinking about politics.” Her decision to join the doctoral program was simple: “I knew and loved the people I was with at MIT.”

Do better spatial networks make for better neighbors? There is evidence that they do, according to Paige Bollen, a sixth-year political science graduate student. The networks Bollen works with are not virtual but physical, part of the built environment in which we are all embedded. Her research on urban spaces suggests that the routes bringing people together or keeping them apart factor significantly in whether individuals see each other as friend or foe.

“We all live in networks of streets, and come across different types of people,” says Bollen. “Just passing by others provides information that informs our political and social views of the world.” In her doctoral research, Bollen is revealing how physical context matters in determining whether such ordinary encounters engender suspicion or even hostility, while others can lead to cooperation and tolerance.

Through her in-depth studies mapping the movement of people in urban communities in Ghana and South Africa, Bollen is demonstrating that even in diverse communities, “when people repeatedly come into contact, even if that contact is casual, they can build understanding that can lead to cooperation and positive outcomes,” she says. “My argument is that frequent, casual contact, facilitated by street networks, can make people feel more comfortable with those unlike themselves,” she says.

Bollen’s case for the benefits of casual contact emerged from her pursuit of several related questions:
•    Why do people in urban areas who regard other ethnic groups with prejudice and economic envy nevertheless manage to collaborate for a collective good?
•    How do you reduce fears that arise from differences?
•    How do the configuration of space and the built environment influence contact patterns among people?

While other social science research suggests that there are weak ties in ethnically mixed urban communities, with casual contact exacerbating hostility, Bollen noted that there were plenty of examples of “cooperation across ethnic divisions in ethnically mixed communities.” She absorbed the work of psychologist Stanley Milgram, whose 1972 research showed that strangers seen frequently in certain places become familiar — less anonymous or threatening.

So she set out to understand precisely how “the built environment of a neighborhood interacts with its demography to create distinct patterns of contact between social groups.”

With the support of MIT Global Diversity Lab and MIT GOV/LAB, Bollen set out to develop measures of intergroup contact in cities in Ghana and South Africa. She uses both street network data to predict contact patterns based on features of the built environment and then combines these measures with mobility data on peoples’ actual movement.

“I created a huge data set for every intersection in these cities, to determine the central nodes where many people are passing through,” she says. She combined these data sets with census data to determine which social groups were most likely to use specific intersections based on their position in a particular street network. She mapped these measures of casual contact to outcomes, such as inter-ethnic cooperation in Ghana and voting behavior in South Africa.

“My analysis [in Ghana] showed that in areas that are more ethnically heterogeneous and where there are more people passing through intersections, we find more interconnections among people and more cooperation within communities in community development efforts,” she says.

In a related survey experiment conducted on Facebook, with 1,200 subjects, Bollen asked Accra residents if they would help an unknown non-coethnic in need with a financial gift. She found that the likelihood of offering such help was strongly linked to the frequency of interactions. “Helping behavior occurred when the subjects believed they would see this person again even when they did not know the person in need well,” says Bollen. “They figured if they helped, they could count on this person’s reciprocity in the future.”

For Bollen, this was “a powerful gut check” for her hypothesis that “frequency builds familiarity, because frequency provides information and drives expectations, which means it can reduce uncertainty and fear of the other.”

Passion for places and spaces

Bollen never anticipated becoming a political scientist. The daughter of two academics, she was “bent on becoming a data scientist.” But she was also “always interested in why people behave in certain ways and how this influences macro trends.”

As an undergraduate at Tufts University, she became interested in international affairs. But it was her 2013 fieldwork studying women-only carriages in Delhi, India’s metro system, that proved formative. “I interviewed women for a month, talking to them about how these cars enabled them to participate in public life,” she recalls. Another project involving informal transportation routes in Cape Town, South Africa, immersed her more deeply in the questions of people’s experience of public space. “I left college thinking about mobility and public space, and I discovered how much I love geographic information systems,” she says.

A gig with the State of Massachusetts to improve the 911 emergency service — updating and cleaning geolocations of addresses using Google Street View — further piqued her interest. “The job was tedious but I realized you can really understand a place, and how people move around, from these images.” Bollen began thinking about a career in urban planning.

Then a two-year stint as a researcher at MIT GOV/LAB brought Bollen firmly into the political science fold. Working with Lily Tsai, Ford Professor of Political Science, on civil society partnerships in the developing world, Bollen realized that “political science wasn’t what I thought it was,” she says. “You could bring psychology, economics and sociology into thinking about politics.” Her decision to join the doctoral program was simple: “I knew and loved the people I was with at MIT.”

Bollen has not regretted that decision. “All the things I’ve been interested in are finally coming together in my dissertation,” she says. Due to the pandemic, questions involving space, mobility, and contact became sharper to her. “I shifted my research emphasis from asking people about interethnic differences and inequality through surveys, to using contact and context information to measure these variables.”

She sees a number of applications for her work, including working with civil society organizations in communities touched by ethnic or other frictions “to rethink what we know about contact, challenging some of the classic things we think we know.”

As she moves into the final phases of her dissertation, which she hopes to publish as a book, Bollen also relishes teaching comparative politics to undergraduates. “There’s something so fun engaging with them, and making their arguments stronger,” she says. With the long process of earning a Ph.D., this helps her “enjoy what she is doing every single day.”