Urbanization: no fast lane to transformation 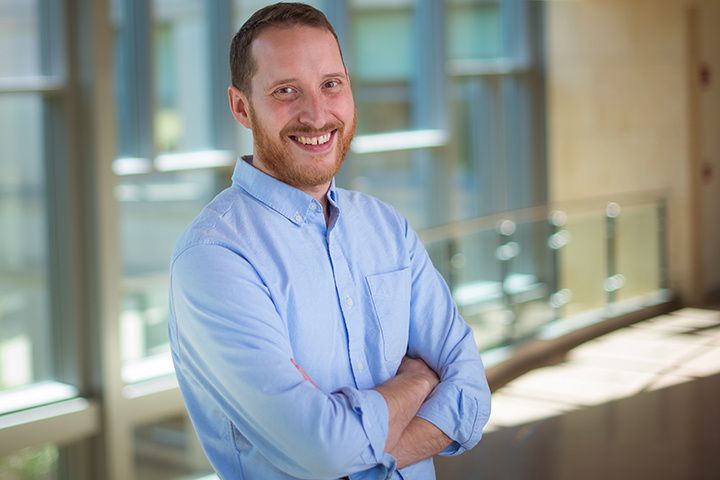 Accra, Ghana “is a city I’ve come to know as well as any place in the U.S,” says Associate Professor Noah Nathan, who has conducted research there over the past 15 years. The booming capital of four million is an ideal laboratory for investigating the rapid urbanization of nations in Africa and beyond, believes Nathan, who joined the MIT Department of Political Science in July.

“Accra is vibrant and exciting, with gleaming glass office buildings, shopping centers, and an emerging middle class,” he says. “But at the same time there is enormous poverty, with slums and a mixing pot of ethnic groups.” Cities like Accra that have emerged in developing countries around the world are “hybrid spaces” that provoke a multitude of questions for Nathan.

“Rich and poor are in incredibly close proximity and I want to know how this dramatic inequality can be sustainable, and what politics looks like with such ethnic and class diversity living side by side,” he says.

With his singular approach to data collection and deep understanding of Accra, its neighborhoods, and increasingly, its built environment, Nathan is generating a body of scholarship on the political impacts of urbanization throughout the global South.

A trap in the urban transition

“Modernization theory states that as people become more ‘modern’ and move to cities, ethnicity fades and class becomes the dominant dynamic in political behavior,” explains Nathan. “It predicts that the process of urbanization transforms the relationship between politicians and voters, and elections become more ideologically and policy oriented,” says Nathan.

But in Accra, the heart of one of the fastest-growing economies in the developing world, Nathan found “a type of politics stuck in an old equilibrium, hard to dislodge, and not updated by newly wealthy voters,” he says. Using census data revealing the demographic composition of every neighborhood in Accra, Nathan determined that there were many enclaves in which forms of patronage politics and ethnic competition persist. He conducted sample surveys and collected polling-station level results on residents’ voting across the city. “I was able to merge spatial data on where people lived and their answers to survey questions, and determine how different neighborhoods voted,” says Nathan.

Among his findings: Ethnic politics were thriving in many parts of Accra, and many middle-class voters were withdrawing from politics entirely in reaction to the well-established practice of patronage rather than pressuring politicians to change their approach. “They decided it was better to look out for themselves,” he explains.

In Nathan’s 2019 book, “Electoral Politics and Africa's Urban Transition: Class and Ethnicity in Ghana,” he described this situation as a trap. “As the wealthy exit from the state, politicians double down on patronage politics with poor voters, which the middle class views as further evidence of corruption,” he explains. The wealthier citizens “want more public goods, and big policy reforms, such as changes in the healthcare and tax systems, while poor voters focus on immediate needs such as jobs, homes, better schools in their communities.”

In Ghana and other developing countries where the state’s capacity is limited, politicians can’t deliver on the broadscale changes desired by the middle class. Motivated by their own political survival, they continue dealing with poor voters as clients, trading services for votes. “I connect urban politics in Ghana to the early 20th-century urban machines in the United States, run by party bosses,” says Nathan.

This may prove sobering news for many engaged with the developing world. “There’s enormous enthusiasm among foreign aid organizations, in the popular press and policy circles, for the idea that urbanization will usher in big, radical political change,” notes Nathan. “But these kinds of transformations will only come about with structural change such as civil service reforms and nonpartisan welfare programs that can push politicians beyond just delivering targeted services to poor voters.”

Falling in love with Ghana

For most of his youth, Nathan was a committed jazz saxophonist, toying with going professional. But he had long cultivated another fascination as well. “I was a huge fan of ‘The West Wing’ in middle school” and got into American politics through that,” he says. He volunteered in Hillary Clinton’s 2008 primary campaign during college, but soon realized work in politics was “both more boring and not as idealistic” as he’d hoped.

At Harvard College, where he concentrated in government, he “signed up for African history on a lark — because American high schools didn’t teach anything on the subject — and I loved it,” Nathan says. He took another African history course, and then found his way to classes taught by Harvard political scientist Robert H. Bates (PhD’69) that focused on the political economy of development, ethnic conflict, and state failure in Africa. In the summer before his senior year, he served as a research assistant for one of his professors in Ghana, and then stayed longer, hoping to map out a senior thesis on ethnic conflict.

“Once I got to Ghana, I was fascinated by the place — the dynamism of this rapidly transforming society,” he recalls. “Growing up in the U.S., there are a lot of stereotypes about the developing world and I quickly realized how much more complicated everything is.”

These initial experiences living in Ghana shaped Nathan’s ideas for what became his Harvard University doctoral dissertation and first book on the ethnic and class dynamics driving the nation’s politics. His frequent return visits to that country sparked a wealth of research that built on and branched out from this work.

One set of studies examines the historical development of Ghana’s rural north in its colonial and post-colonial periods, the center of ethnic conflict in the 1990s. These are communities “where the state delivers few resources, doesn’t seem to do much, yet figures as a central actor in people’s lives,” he says.
Part of this region had been a German colony, and the other part was originally under British rule, and Nathan compared the political trajectories of these two areas, focusing on differences in early state efforts to impose new forms of local political leadership and gradually build a formal education system.

“The colonial legacy in the British areas was elite families who came to dominate, entrenching themselves and creating political dynasties and economic inequality,” says Nathan. But similar ethnic groups exposed to different state policies in the original German colony were not riven with the same class inequalities, and enjoy better access to government services today. “This research is changing how we think about state weakness in the developing world, how we tend to see the emergence of inequality where societal elites come into power,” he says. The results of Nathan’s research will be published in a forthcoming book, “The Scarce State: Inequality and Political Power in the Hinterland.”

At MIT, Nathan is pivoting to a fresh new framing for questions on urbanization. Wielding a public source map of cities around the world, he is scrutinizing the geometry of street grids in a thousand of sub-Saharan Africa’s largest cities “to think about urban order,” he says. Digitizing historical street maps of African cities from the Library of Congress’s map collection, he can look at how these cities were built and evolved physically. “When cities emerge based on grids, rather than tangles, they are more legible to governments,” he says. “This means that it’s easier to find people, easier to govern, tax, repress, and politically mobilize them.”

Nathan has begun to demonstrate that in the post-colonial period, “cities that were built under authoritarian regimes tend to be most legible, with even low-capacity regimes trying to impose control and make them gridded.” Democratic governments, he says, “lead to more tangled and chaotic built environments, with people doing what they want.” He also draws comparisons to how state policies shaped urban growth in the U.S., with local and federal governments exerting control over neighborhood development, leading to redlining and segregation in many cities.

Nathan’s interests naturally pull him toward the MIT Governance Lab and Global Diversity Lab. “I’m hoping to dive into both,” he says. “One big attraction of the department is the really interesting research that’s being done on developing countries.”  He also plans to use the stature he has built over many years of research in Africa to help “open doors” to African researchers and students, who may not always get the same kind of access to institutions and data that he has had. “I’m hoping to build connections to researchers in the global South,” he says.