How Can the US Reap the Benefits of Platform Companies While Protecting the Interests of Workers and Society? 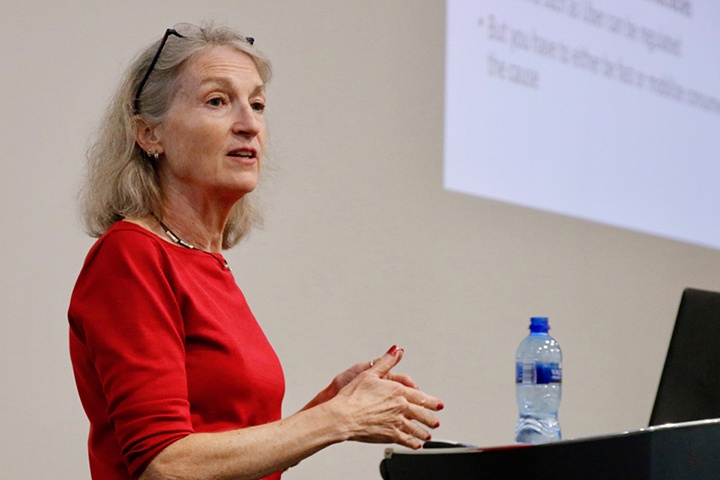 Prof. Thelen speaks about Uber at the Stellenbosch Institute for Advanced Study in South Africa in March 2019

In recent years, American corporations like Uber, Amazon, and Airbnb have come to exemplify a new type of business model. Instead of depending on direct sales of products or services, these “platform companies” leverage their vast data resources to establish themselves as critical intermediaries and market-makers, while minimizing their reliance on traditional employment relationships.

After spending decades studying the operation of labor markets in rich democracies, Kathleen Thelen, MIT’s Ford Professor of Political Science, has recently turned her attention to the platform model and its implications for workers and societies. In a new paper for Politics and Society she and co-author K. Sabeel Rahman of Brooklyn Law School explore why the United States has provided especially fertile ground for these companies to grow, and offer suggestions (including updating of labor and securities laws) aimed at reducing the precariousness of workers in platform-oriented sectors, and mitigating the firms’ broader effects on economic and political inequality.

“I want to be clear that I’m not against platforms. They have brought some amazing conveniences, and I use some of them myself,” says Thelen. “The problem is a mismatch, as the growing power of these megafirms often outruns the government’s capacity to control them. The regulatory frameworks have to keep pace so we can harness the best of what these technologies have to offer without paying steep societal costs.”

Thelen notes that US labor laws are still rooted in the mid-20th Century, when large industrial firms were the dominant economic players. They generally pursued stable, long-term growth while employing and providing benefits to employees of diverse skill and income levels. By the late 20th Century, this model was overtaken by a more investor-driven approach, with greater focus on near-term profit through extensive outsourcing, asset sell-offs, and labor-reducing strategies.

The platform model takes this a step further, emphasizing the use of independent contractors who are legally self-employed. “The firm itself then has no responsibility for wages, benefits, working hours, and other things that used to be fairly well protected under standard contracts,” explains Thelen.

One effect of this is that consumers and platform-company management are drawn into a new type of relationship, says Thelen. While on one level it is beneficially symbiotic, it also creates “a kind of complicity, often at the expense of labor…You often read comparisons of platform firms to old monopolies like the 19th Century railroads, but one big difference is the relationship to consumers, who today don’t necessarily experience these platforms as imposing constraints. If anything, they are seen as liberating – you’re freed from having to hail a cab in the rain or look for parking at the mall, and so people appreciate and, over time, come to depend on these companies.”

The issue, she says, is that “the labor practices that make that possible involve low wages, extremely variable and uncertain working times, and sometimes pretty brutal conditions.” And while platform firms represent a very small share of overall employment, they create profound pressure in sectors where they gain traction, such as lodging and retail.

“The presence of Airbnb trickles down to hotel cleaning staff who mostly work for staffing agencies, and stores like Macy’s and Target and Walmart survive by adopting aspects of the platform model, like flexible scheduling for workers, which often translates into irregular or inadequate working times, and calling people at the last minute for shifts,” notes Thelen. As a result, precarity is increasing for millions of workers, who face highly contingent employment and do not receive health care, sick pay, vacation time, or retirement benefits.

Thelen and Rahman identify three factors that have enabled US-based enterprises to pioneer the platform model: a fragmented policy and regulatory landscape, institutional nurturing of the consumer-investor alliance, and a financialized political economy that provides abundant and highly patient capital. This last factor is important because platform companies often lose money for years as they build and scale their businesses in pursuit of winner-take-all dominance of a market sector.

In contrast to many other industrialized nations, the US divides regulatory responsibility among different levels of government, and agencies often have blurry or overlapping mandates, say Thelen and Rahman. “It’s an especially congenial atmosphere for firms to engage in regulatory entrepreneurship or arbitrage,” which benefits platform firms because they “often expand in regulatory grey zones, innovating and creating whole new markets…before policymakers have developed rules to govern them,”  notes Thelen.

Also setting the US apart are anti-trust regulations that have an unusually consumer-oriented focus. “The idea is that, as long as consumers’ interests are being served, even significant concentrations of power are OK,” explains Thelen. “So for example, so long as consumers are benefitting from Amazon’s lower prices and service, Amazon doesn’t run afoul of the law. Other countries have different interpretations; European regulators are much more likely to prioritize competition per se, which typically involves being more skeptical about the potential for abuse of dominant market positions.”

Going forward, Thelen sees several possible “backstops” that could help balance the benefits provided by platform companies with their broader impact. “The point is not to shut them down, but to embed the firms in a broader set of regulations and make sure that labor’s interests are not completely boxed out of the picture,” she says.

Thelen notes that unions in the US must organize workplace-by-workplace, while in Europe they cover entire market sectors and thus hold more power. She also points to increasing discussion of a “revamping or rejuvenation of American labor law – you can see signs of that in advocacy for a $15 minimum wage across whole sectors, and new forms of union organizing at a community level. These are initiatives not so much against platforms but against precarity.”